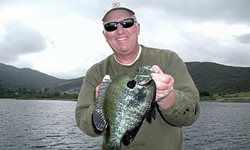 For over 25 years, Smith and his company have been providing overlays, rockwork, micro toppings, stained and stamped concrete, saw cuts and etchings, and concrete countertops to clients, most of whom either keep coming back for more or refer people to the company.

According to the company's website, their mission statement reads: "For 25 years, we have worked with concrete as our medium to express our passion. We are consistently looking for new products and applications to bring hardscape to an art form. There is not another concrete company that offers more techniques to complete any concrete project. We specialize in award-winning hardscapes, cutting edge architectural finishes, poured in place countertops, and three dimensional artistic sculptures. Concrete is our life... We want to be part of yours."

1. Delegating
"I went into business when I was 20 years old and I wore all the hats," Smith explains. "I wish I was smart enough to have people to delegate to (back then). I finally realized that my time was worth more improving my craft, and I now have proper office staff for all the day-to-day business stuff."

"I hired an office manager, someone who runs my office and keeps me in line," he continues. "Also, I'm not organized and I know I'm not, but I surround myself with people who are."

Smith adds that the importance of surrounding himself with others he trusts has allowed him to step back from the day-to-day company issues and get back to doing what he loves—crafting with concrete.

2. Pricing
Noting that the decorative concrete sales process is intimate, Smith says, "The clients aren't sure what they want, the crew's not sure how to build it, and the material's delicate. Our job is to see what our clients are up against."

Smith says he stays away from generic estimates and instead focuses on including all (worst through best) scenarios in the paperwork.

"We're a little higher at first, but [the clients] save money [in the long run], because we take into account all scenarios," he adds. "It's a joint partnership with our clients, and it takes lots of communication."

3. Employees
Smith says he surrounds himself with a dedicated group of employees. "Most have been with me since I first started," he explains. "We're like family."

In those instances when someone new is brought in, they are expected to hit the ground running. "When we bring in someone new, they have to go through the ringer," Smith says. "We push our employees and challenge them to see what they're capable of."

And when it comes to getting his point across, Smith notes, "I'm not a yeller or a screamer. I encourage, motivate and enlighten. I offer money incentives beyond salary, which takes the 'bad guy' scenario away. Then it's up to them to get it done, and if they don't they just get their wages."

4. Marketing/advertising
The importance of having a good website is not lost on Smith.

"I think our website is one of the best on the net, and I've worked on it a lot over the years," he explains. "It's not a 'trophy', 'look at us' website. I want clients to want to get to know us. People want to do business with people, not companies."

Smith also has a unique approach once each job is completed.

"After every project, we ask for feedback," he says, "and that's increased our word-of-mouth referrals. The most important part of marketing is relationships."

5. Vendors/suppliers
Smith focuses on relationships with everyone he's in contact with, including his vendors and suppliers.

"Most have a back-door disclaimer to all things, and as an installer, that's a problem," Smith observes. "We just did a job where the vendor/supplier wanted us to come watch a job, and instead we sent a whole crew and they were wowed by our involvement."

"We find that in order to facilitate relationships it's important to be honest," he adds. "We're all in this together, and we should protect each other and be there for each other instead of pointing fingers at each other when something goes wrong."

Smith explains, "Our job supervisors don't just watch us, they keep an eye on all the other contractors and inspectors involved to help meet a deadline."

Smith's theory is simple: "If we give 10 percent to help the electricians out, we may end up saving down the road on overtime costs...It's about being there for the entire project, not just looking at ourselves as the center nucleus."

"Instead of buying all new equipment, we do research and find out how we can acquire what we need and maintain it with the least amount of cost and effort," he says. "I get equipment used and I don't have a problem with it, but I may buy something new and use it once or twice and still have to spend money on maintaining it all the time...that's a waste of money."

8. Clients
Rather than look at clients as a vehicle to make money, Smith sees other possibilities.

"I now look at everyone as a friend I haven't had the chance to get to know yet," he explains of his philosophy. "I still get together with some of my past clients and talk about life. It's about relationships. I tell my sales staff that it's not about selling concrete, it's about the relationship with the client. If you're honest about everything, the client will be the same way and there will be no barriers."

9. Mistakes
"Don't take yourself so seriously," Smith advises his colleagues. "We're all in life together."

And when the inevitable does happen, he says, "Pick yourself up and learn from your mistakes. As you do that, expectations of others go down. Don't be afraid to make mistakes. It's part of the creative process. With a little intelligence and a lot of passion, anything can be done."

He's also been known to say it's not about the money, and he says he finds it difficult to work with clients or partners who put money first, sacrificing, according to him, integrity and creativity.

By setting the bar high in the decorative concrete industry, Smith has led Richard Smith Custom Concrete into numerous commercial and residential venues, and in turn has crafted the kind of work that others in the industry will look at with equal parts awe and respect.