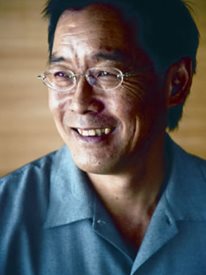 In this third installment of our Hindsight series, we're talking to someone who probably needs no introduction Fu-Tung Cheng, world renowned concrete artisan and owner/president of Cheng Design and Cheng Concrete Exchange in Berkeley, Calif.

Cheng Design and Construction provides complete design services for custom homes and residential design. From architectural design to construction, Cheng's custom home projects have been his most spectacular challenges, earning him numerous awards over the years and giving him an outlet to further extend his artistic expression in other areas of the home, such as hardscaping and landscape design.

Cheng is author of the industry bestseller Concrete Countertops (Taunton, 2002) as well as Concrete at Home (Taunton, 2004). Most recently, Cheng was inducted into the National Kitchen and Bath Association (NKBA) Hall of Fame, recognized as an elite group of influencers in the kitchen and bath industry.

1. Workshops
Cheng's very first workshop had five attendees, and he says he didn't even know exactly what to teach, other than the usual fare: mold-making, polishing and grinding. But he did know what he didn't want to teach. "I didn't want to teach any proprietary stuff, I wanted to hold it close to my chest," Cheng recalls. But there were examples of proprietary countertops and "regular" countertops where the class was held, and the students pointed to the proprietary countertops and said they wanted to learn how to make them.

Cheng says after that first class, he decided to offer Advanced Concrete Countertop Design Training, where he could teach everything at a price that coincided with the value of the knowledge. Cheng says, "It's been a smashing success. It gave me freedom because I didn't have to 'couch' stuff. It completely changed the atmosphere, and the students feel they are getting incredible value." (All students are required to sign a nondisclosure agreement.)

"By now we've had over 750 students, 12 to 14 at a time. In the Advanced Training, it's more intimate and I get to work with everyone," Cheng explains. "We haven't had a single bad review, and students are paying nearly $3,000, so it's not cheap. But they all say they got more than they expected out of it. They come away feeling fulfilled and I feel great about that...It's a moral and spiritual boost for me, and [it was] a critical decision to completely open up about design, process and technique in class."

2. Employees
"Managing employees is an art in itself," says Cheng, whose company has grown organically from a hands-on shop to a full-service design studio. "I don't have the kind of management style you find in a book—I treat everyone with respect and cultivated an atmosphere with no hierarchy, which worked until I got to about 15 employees. Then management becomes huge. So I treat all with the same respect and institute a good management model."

Cheng says that he works with artisans, most who don't want or appreciate the "corporate feel." As his company has grown, he says he's had to learn more about human resources, managing employee expectations, handling employee reviews, and the dreaded employee turnover.

"We had the same 10 employees for 15 years, and now that we have 25 we've had turnover," he explains. "I'd never worked for another company and I had no management style, so I hired people who plan and provide stability. You need the right managers in place to help move the entire business forward."

3. Marketing/ Public Relations
"I had to learn that marketing and public relations are separate, but I didn't come to learn that until the last 10 years or so," comments Cheng, adding that one of Cheng Design's strongest suits is its public relations. "But it's hard to budget enough for marketinghow much gravy do you allocate to get more work so you're not slow, taking into account the lag time in developing leads?"

"We really pound the pavement and send out people to give presentations, looking for opportunities in given markets," he adds, noting that Cheng Design is also diversifiedincluding design services, training and workshops and several productsand that makes a huge difference as well.

"We have steady business that enables us to develop new areas without stopping our bread and butter," Cheng explains. "That's been a real boonit took time to get to that point."

Taking time is something Cheng advises. "If you're not in a huge hurry, there's opportunity to enjoy what you do at the lower levels, but there's no time to enjoy building of business if you're in a hurry. It's like having a child and meeting them when they graduate high schoolyou're proud but you missed all the little things."

"Hurry slowly. Savor times you don't have material things and unlimited resources, and appreciate the moment," he says. "Don't be so goal-oriented. If you make artificial success based on what's trendy, you're not grounded."

4. Working with Dealers
Cheng Design currently works with kitchen dealers that sell their Geocrete concrete countertops and Cheng Custom Hoods, which has been a learning experience in itself. "Most kitchen dealers want product for free," notes Cheng. "I thought architects would gravitate to my work, but they are one of our lowest specifiers. Interior designers and kitchen showrooms are 30 percent, and the biggest market is end users or homeowners."

Cheng explains that he originally envisioned 100 showrooms across the country showing the products. "We raised money to do that, but it was the wrong strategy," he says. "It's a local phenomenoninstallers have to be passionate about it, and we found that no one wanted to install it."

5. Customer Relations
Cheng says the secret to a good client relationship is managing expectation of the product's performance. "If they understand what to expect, they will be a good client," he observes. "We don't make concrete countertops look like granite, so people don't expect them to perform like granite...We offer great design through function, that's our approach."

As such, Cheng Design customers know that Geocrete countertops may stain or get hairline cracks, and they accept the possible flaws.

What worries Cheng are concrete sinks; he says he thinks those sinks are going to fail in the eyes of consumers. "My own countertop's splash zone is worn and a little rough, and a sink would be 10 times that much," he explains. "It's shortsighted to get seduced by the sculptural form of concrete to that degree...[concrete sinks] look fabulous, but I fear for the industry. I might be wrong."

6. End Goal
For Cheng, who has said "design is the software of our industry," it all boils down to understanding what constitutes good design. "These are not isolated objects, they are in the central area of a home," he notes. "Good design encompasses art, craftsmanship and practical application."

Using concrete for its inherent qualities, and not for something another material can do better, is what Cheng does best. "I don't force concrete, I do what the design calls for, not what my business dictates," he says. "[I] establish it on the high end as an artisan product, not per square foot...it's very hard to do."

Cheng accepts the vulnerabilities of concrete and says he teaches a holistic perspective. "It's not about countertops, it's about craftsmanship," he concludes. "It's not about products per se, it's a different mentality. It's a sense of concrete at home, and good design brings it all together."

Cheng's tips, much like himself, are honest and practical. It's no wonder his students think they get more than their money's worth with Chengand his openness is sure to bring more to the industry he clearly loves so much.