"If I only knew then..."
Hindsight with Clark Branum of Brickform Rafco 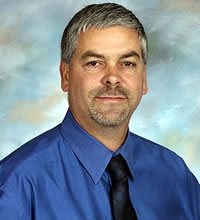 In this second installment of our Hindsight series, were talking to yet another leader in the decorative concrete industry, Clark Branum, Director of Technical Support for Brickform Rafco. While most salesmen focus on their company's products, Branum focuses on processes or more specifically, what the underlying issues are leading to a particular products use.

Branum's more than 24 years experience, starting with entry-level curb and sidewalk finishing in Seattle and Alaska, coupled with an artistic background (he's a musician), has enabled him to grow the decorative concrete industry through education, one contractor at a time. Branum takes care of clients in Oregon, Washington, Idaho, Montana, Alaska and parts of Canada, as well as one client he's close with in Oklahoma City, The Stamp Store. Also, on the Board of Directors for the American Society of Concrete Contractors Decorative Concrete Council, Branum helps with the World of Concrete's mega-demos.

1. Education
"I was a concrete finisher for 15 years before I knew anything about concrete," says Branum, adding that he had to learn a lot through trial and error. "If you learn about concrete itself, the rest will come naturally."

Branum says that often contractors get caught up in coloring, texturing, etc., but if they don't understand concrete itself there are still struggles. He says common issues include cracking, shrinkage, improper joining and water/cement ratios, as well as climate issues.

He recommends learning about concrete through industry resources such as the American Society of Concrete Contractors (ASCC), American Concrete Institute (ACI), and The Concrete Network, as well as the Bob Harris line of books and seminars at the World of Concrete.

"I still learn and attend seminars every chance I get," he adds. "Education is an ongoing process."

2. Choosing products
"Don't let someone else make a decision that will affect your company's work," Branum cautions. "Most manufacturers don't have time to find out what every contractor is doing with every gallon of product."

He recommends gathering technical data sheets from two or three comparable products and making an educated decision based on what you need.

"Learn about the products and choose the appropriate product for the conditions of your concrete," he adds. "Know your concrete and you'll know what product to use it's critical to have that kind of knowledge."

3. Estimating
Branum says that every contractor approaches estimating differently, but what he's found that works is simple. "I try to build profit into man hours," he says.

He also keeps an eye on material costs and availability by requesting regular quotes from his suppliers, at least every six months but every quarter is better.

"Otherwise, you can end up delaying a job or having to use more expensive products," he notes. Branum says this is also a great way to lock in prices for a given period of time.

"Having exclusions and line items controls the job and makes estimating easy," he adds.

5. Presentation
Beyond showing up for bids looking presentable (versus coming straight from a job site with dirty clothes on), Branum says he has invested in technology that has more than paid for itself.

With a laptop and printer he can plug into his vehicles cigarette lighter, Branum says he can present a polished, professional bid, all while sitting in a prospective clients driveway.

"If you carry yourself more professionally, there's no need for flexibility on pricing," explains Branum. "I never lower my price when times are slow. I don't budge on price and I'm upfront with clients, they decide if they can afford me or not."

Selling on reputation versus price has proven successful for Branum; he says he would average one out of three bids, and sometimes he would even get five or six in a row.

6. Contracts
Investing in CAD software has also paid off for Branum.

"Typically, a homeowner would change their mind [frequently] because they couldn't visualize something the first time," he explains. "But I was able to create dimensional drawings showing colors and textures, all of which helped visualization. And the drawings gave me square footages."

Branum says the drawings also helped define the scope of work. He would attach the bid to the drawing, complete with pricing, line items and square foot prices. Then, if the parameters of the job changed, everyone involved would know how much the price would increase (or decrease).

"Rather than give a lump bid, this would eliminate a point of argument," he concludes.