Hindsight with Alan Sparkman of the Tennesse Concrete Association

"If I Only Knew Then..." by Juliet Farmer 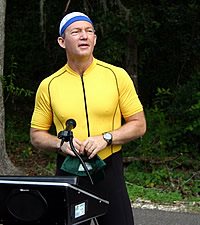 Alan Sparkman, Executive Director of the Tennessee Concrete Association (TCA), grew up in the ready-mix business in southeast Kentucky. Along the way, Sparkman also worked with insulating concrete forms in manufacturing and construction for about four years, gaining experience while overseeing a crew that installed and specialized in concrete contracting.

Sparkman also worked for the Aberdeen Group (now Hanley-Wood), a company that published several concrete-related magazines, as well as produced the World of Concrete trade show. As the director of industry relations, he helped develop an early online community targeted to the concrete industry, and was the chief 'technology evangelist' to explain the benefits of the system to various industry organizations.

Employee relations
Sparkman got a taste for being a boss at an early age—his family owned a ready-mix business with 35 employees.

"There's a challenge in the ready-mix business, as well as every other industry, with balancing work life with the rest of your life," Sparkman explains. "It's a challenge for both an owner and his or her employees. It's easy to get out of balance on the work side. In this industry, there will be times when a 60- to 70-hour work week is required, so that can certainly present a challenge retaining people."

Sparkman says it's important to step back and look at the big picture. "You still need to get the job done, but if you're doing it with too few people, too often, it will reflect on the hours worked by everyone," he adds. "If you believe what's written, there will be a continued challenge in the coming decade to keep people in the work force— especially in jobs that may increasingly be seen as less than desirable positions."

Sparkman recommends thinking more broadly in regards to what an ideal employee is. "Part time employees, retired baby boomers, those are a good audience to tap in to," he observes. "The profile of a 'typical' employee is really going to change for many of us. You have to get creative, because just offering more pay isn't going to be [creative] enough to retain people."

"Every industry struggles with this—the norm is different today. Employees have options. As employers, we don't have the leverage to work the way we used to. That's a real challenge for 21st Century managers," says Sparkman.

Marketing/advertising
Even armed with a degree in business management and having grown up in the ready-mix business, Sparkman says he used to think marketing was a waste of time.

"This industry as a whole is not good at marketing," Sparkman continues. "Marketing is more than just promotion—it develops a market. But a lot of people think it's a waste of time and money."

"Marketing is more than tomorrow's sale," observes Sparkman. "You have to take a service approach to the market. Our product—concrete—is the solution, and it's a good, sound and sustainable alternative to other products on the market."

According to Sparkman, green building is a tsunami that's coming. "It adds another whole dimension to marketing that's going to become more and more important," he adds. "It's a reflection of the company as a whole and their entire approach to doing business."

In short, Sparkman says that although there are still some areas where you don't have to market and you can still make a living, "that's definitely the exception."

Customer relations
"When you're a customer somewhere, think about how you want to be treated, what you want and expect," Sparkman says. "Now turn it around on your company—that's uncomfortable, but that's the heart of customer service in the 21st Century."

Sparkman says the concrete industry has always been very transactional—focusing on one job then the next, often based on the very un-sustainable concept that cheapest is the best option.

"We get caught up in job execution, not what's best for the customer," he observes. "But when you don't understand the lifelong value of a customer, that shrinks your pond. Smart companies are going to have to factor that in."

"There's lots of consolidation in the industry right now," Sparkman continues. "Large companies have a really hard time seeing the customer, and that lets smaller companies come in and focus on customers. Right now, it's both consolidation, with the big getting bigger, and it's lots of new small businesses. And small businesses focus on the blind spots of the big guys."

Pricing
Thinking long term is the key, according to Sparkman.

"Our pricing model has to expand to address those issues as well," Sparkman adds. "It's not just about today's job/cost/profit—you need to think long term."

Education
"Some may look at education as a waste of time, and those folks are going to be left behind," explains Sparkman. "I think companies that invest in improving their people do well in the marketplace."

"We get secure on our knowledge of what we know," he observes. "But there's so much we don't know, and that loss of knowledge will hurt...what we know is like milk—it's aging and soon it will be out of date."

Sparkman says that the 21st century employee is looking for a chance to improve him or herself, and offering education is a way to be more competitive overall.

"You can reward those who learn faster, they are worth more money, and their work is worth more," he adds.