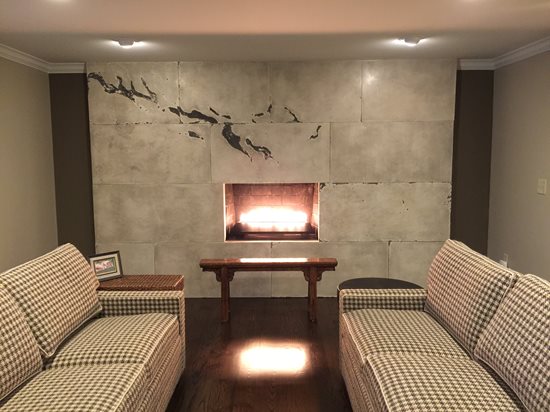 This concrete fireplace was designed to bridge the gap between traditional, rustic, and contemporary. Intentional voids in the finish give it texture, contrast, and a sense of flow.

In the design world, perfection can be a detriment. Throwing in a few happy accidents creates interest and prevents “perfection fatigue.” It also results in a more organic look that seems inspired by nature rather than a blueprint.

This concrete fireplace in a Centerville, Ohio, home is an example of this imperfect approach, incorporating intentional design flaws that add character and subtle tension. The fireplace design was a collaboration between M Concrete Studios and the homeowner, who wanted to bridge the gap between traditional, rustic, and contemporary. 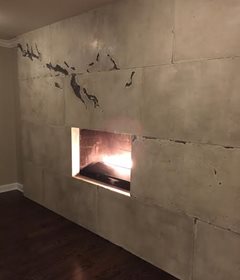 “The homeowners were initially drawn to concrete because they wanted something less traditional than stone or brick. We were able to create intentional voids in the finish and accent them with color, giving it texture, contrast, and a sense of flow,” says Zack Mehaffie, who operates M Concrete Studios along with his brothers Ryan and Noah. “We also designed a fault line feature to incorporate some earthy, natural lines and to give the fireplace some pop with the darker color.”

The floor-to-ceiling fireplace is 8 feet high and 14 feet wide. It is composed of 13 pieces with a 4-inch return on the side pieces. “We assembled and attached them to a steel-framed backing wall using brick ties and heavy-duty adhesives,” says Mehaffie. “To achieve the desired finish, we used a proprietary blend of portland cement and several types of sand. It took around 10 sample pieces to get the exact finish we wanted.”