In the past, removing stubborn stains and surface deposits from concrete or profiling surfaces to improve the adhesion of coatings usually meant working with highly caustic muriatic acid or using noisy, expensive blasting equipment. Now there's a new product on the market designed to eliminate some of the drawbacks of existing methods without negatively impacting the environment.

The patented technology, called Tek Gel™ for Profiling, is a surface treatment with a gel-like consistency that can be applied with minimal run-off to flat, vertical, and even overhead surfaces. It offers the dual advantages of uniformly profiling concrete while cleaning it. The high-viscosity gel can effectively strip efflorescence, rust, mineral and salt deposits, algae, and other unwanted organic gunk from concrete. When applied to smooth, dense steel-troweled floors, it "opens up" the surface to improve bonding with subsequent coatings.

Tek Gel for Profiling was developed and patented by Daniel Doolan, CEO of Surface Gel Tek. The company's mission is to provide environmentally safe gelled surface treatments that help craftsmen do their jobs more efficiently and profitably while providing consistent surface-preparation results.

"Muriatic acid goes anywhere it wants to. We saw the need for something that would be uniform and controllable. Tek Gel for Profiling stays where you put it," says Tamryn Doolan, Surface Gel Tek's chief administrative officer. Developing a green product that wouldn't harm the environment was a top priority for the company. "We chose to put no solvents, phosphates, or detergents in the product. And as soon as you add water to it to flush it, it's diluted," says Tamryn.

Even though Tek Gel does contain an acid, which is responsible for its etching ability, the acid is suspended in the gel solution so its interaction with the concrete is limited to the interface of the surface. It won't compromise the pH of the concrete, and it won't contaminate the sewage system after it's flushed. The gel is also safer to apply than liquid acids. Although safety goggles and gloves are always recommended when working with the product, splashing is of limited concern. What's more, Tek Gel is nonflammable and lower fuming, so it can be used safely in well-ventilated indoor areas.

Tek Gel's environmentally friendly composition does result in some limitations, however. Because the gel contains no solvents or detergents, it will not function as a degreaser to remove oil-based stains. In addition, Tek Gel will uniformly etch surfaces to an approximate depth of 3 mils. To achieve greater profiling depths, the use of a hard-bristled brush during the first application or a second application may be required.

"There is certainly still a place for blasting, but in many cases, our alternative is more cost effective," Tamryn explains. She points out that blasting often requires expensive equipment and skilled machine operators. And on projects where noise or dust is a concern, blasting may be unacceptable. 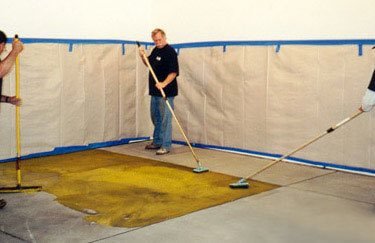 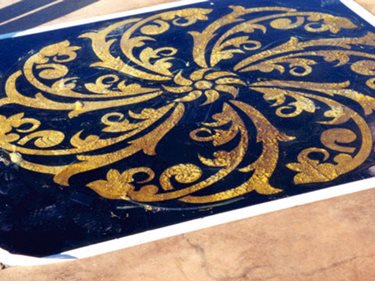 Tek Gel application in GAP corporate headquarters building This 5-foot unique stencil design that was etched into an entryway slab. The slab was prestained, and then the design was etched into it. The picture above shows the stencil in place with Tek Gel for Stenciling applied to the exposed areas of the stencil.

A large surface preparation project completed last year illustrates how Tek Gel can be a viable alternative to jobs where blasting isn't an option. The owners of the GAP corporate headquarters building, located in the bustling Embarcadero district of San Francisco, wanted to give the concrete floor of the building's new art gallery the look of a 30-year-old slab. The enclosed environment, painted walls, limited access to water, and lack of a drain drastically narrowed the field of surface-preparation options. After testing a variety of methods, general contractor Swinerton & Walberg selected Tek Gel because of its controlled application and depth, ease of disposal, and ability to achieve the desired look. The applicator, J & R Flooring, had never worked with the gel before, so crews were plenty skeptical at first. "At the beginning of the project, we sent two people over to work with them. After about an hour, they were saying, 'Thank you!' They openly admitted they could not successfully accomplish the job in any other way," says Tamryn. Because no floor drain was available, crews could not remove the gel by flushing it with water. So they simply used a squeegee to push the product into a pile, and then they scooped it into a pail, where it was quickly neutralized with baking soda. The slab was then wet mopped and the remainder was completely removed with a wet vac.

For contractors, ease of application and disposal are the chief advantages of the user-friendly gel. It comes ready to apply in pails and drums, and no special equipment is needed for application. It goes on easily with a paint roller, squeegee, sponge, nylon-bristle brush, or even an acid-resistant low-pressure sprayer.

Tek Gel for Profiling has been so well accepted by contractors, that Surface Gel Tek will soon be introducing a new product: Tek Gel™ for Stenciling. This latest innovation is similar in formulation to Tek Gel for Profiling but even gentler, so it won't eat away at plastic stenciling materials, allowing the stencil applicator to perform precision decorative etching. Because of the product's gelatinous grip, it stays on the stencil and won't bleed underneath it, etching only the exposed areas. "It will give you a very precise etched pattern, right down to the finest detail," explains Tamryn.

Both Tek Gel™ for Profiling and Tek Gel™ for Stenciling are available from licensed distributors throughout the United States and Canada.

Anne Balogh writes feature articles each month for The Concrete Network (www.concretenetwork.com). She is a freelance writer based in Glen Ellyn, Ill., and a former editor of Concrete Construction magazine.