A reflecting pool with sun-bleached cedar logs enhances the naturalism of this artificial rock fountain. The sculpture is 7 1/2 feet tall, 8 feet wide, and 4 feet deep.

Forest Boone, president and owner of Museumrock Products, Louisville, Ky., is a professional sculptor with a passion for geology. He has combined his interests and talents into a very successful businessone that allows him to replicate millions of years of geological history in artificial rock formations molded in concrete.

Boone attended 8 years of undergraduate and graduate school to learn the art of sculpting, mold making, and casting. As part of his thesis in graduate school, he created a series of artificial rock sculptures for public parks and museums throughout the Northeast, including Central Park in New York, the Grounds for Sculpture Park in Hamilton, N.J., and the Hirshorn Museum and Sculpture Garden in Washington, D.C. His distinctive art received much attention and praise, and his business took off from there. He launched Museumrock Products in 2000 and now has six U.S. design patents for his rock wall systems.

Boones entire product line originates from casts taken directly from natural rock formations. We started out with a series of master molds that I and three other guys cast from various vertical rock walls located in Kentucky and Indiana. Then we worked off of those master molds to come up with different mold combinations, Boone explains. Among his repertoire of molds are various fossil castings taken from one of the oldest existing fossil beds in the country: Falls of the Ohio State Park. Located along the banks of the Ohio River in Clarksville, Ind., the 386-million-year-old fossil beds are among the largest naturally exposed Devonian fossil beds in the world. 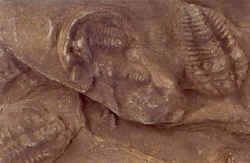 Many of Museumrocks fossil compositions are castings taken from one of the oldest existing fossil beds in the country. 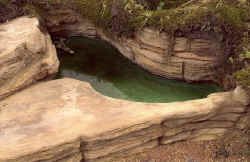 The core-bore drill marks tell a story about the origin of the rock formations while disguising the vertical seams of the mold.

To further add to the realism of his work, Boone incorporates semi-circular core-bore drill marks into the molds. They offer a narrative of the origin of the wall, he says. The drill marks also hide the vertical seams in the mold, while the horizontal seams are hidden by the natural stratification of the layered rock. The result is a rock wall that appears to be seamless and mortarless.

Boone makes his molds from solid rubber or styrofoam to ensure that every fissure, shelf, and crevice from the original rock surface is precisely duplicated in the concrete. The heavy-duty rubber molds can be reused for a virtually unlimited number of castings. The lightweight styrofoam molds are intended for single-use applications.

When casting rock formations onsite, Boone and his team of professional sculptors are involved in each pour. They have installed everything from custom indoor waterfalls to animal exhibits in national zoos. We do it all, from start to finish, says Boone.

Each piece begins with a scale model, which allows Boone to work out any design problems before construction begins. He then manufactures the mold for the full-scale piece in his studio and trucks it to the jobsite, which for some projects can be quite an undertaking. A rubber mold he created for a sculptural indoor fountain for the corporate headquarters of Service Net Inc., Jeffersonville, Ind., consists of 13 pieces and weighs 3,000 pounds. Its the largest mold Ive ever seen in my 10 years of sculpting, says Boone. 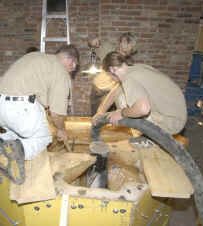 Boone and his crew pump concrete into a rubber mold and vibrate it to eliminate air bubbles. The mold is bolted to a pre-poured footer pad.

Concrete is pumped or poured into the mold over a matrix of reinforcing steel. Smaller details, such as outcroppings, use concrete reinforced with polypropylene fibers. A key part of the finishing process is to impart graduated layers of color to the concrete so it appears exactly as stratified rock would in nature. Boone achieves amazingly realistic results using intrinsically colored grout followed by a special patination process combining iron ore, oxides, and a secret ingredient. As far as I know, theres no one else in the world using the same process. The color is permanent, it wont fade in ultraviolet light, and it looks entirely natural, he says.

Boone also enhances his rockscapes with elements found in nature, such as plants, vines, moss, and limbs from fallen trees. For example, the indoor fountain he created for Service Net has woodland moss and lichens growing on the rock and a reflecting pool accented by logs from sun-bleached cedar trees.

In addition to custom rubber and styrofoam molds, Museumrock will soon begin manufacturing single-use vacuum-formed plastic liners as a cost-effective alternative for large commercial or municipal projects. For more specialized applications, the company can also custom produce lightweight styrofoam form liner panels. Bureaus of Transportation, for example, can use these liners when they need to fill in breaches in rock walls where water has caused erosion. All they have to do is send me a picture of what the rock looks like, and within 2 hours we can carve a 4x8-foot liner that mimics the existing rock, says Boone.

Currently, Museumrock is working with the City of Louisville to create a cast-in-place naturalistic rock base that will support a bronze statue of York, a slave who traveled with and aided Lewis and Clark during their historic expedition of 1803. The statue will commemorate the important role York played in their excursion. The rock formation, which incorporates a natural rock shelf for sitting, will overlook the Ohio River across from the Falls of the Ohio State Park, where the explorers were forced to circumnavigate a naturally occurring waterfall. Boone plans to include fossil impressions cast from the Parks ancient fossil beds in the top of the statue base to further symbolize the sites significance as part of the Lewis and Clark National Historic Trail.

Another project in the works is for the Massachusetts Institute of Technology in Boston. They want us to recreate a Martian rockscape outside of the Aeronautics and Astrophysics Center. We will be working off of actual photographs taken of the surface of Mars to create the molds, Boone says. MIT plans to use the faux Martian terrain to simulate space buggy travel on the red planet.

In fact, there seem to be no rock formationsin this world or beyondthat Boone and his sculpting team cant replicate. When it comes to designing the concrete mixes for each project, however, they rely on their in-house concrete expert. Hes the person I turn to if I have really tough concrete questions, says Boone.

Anne Balogh writes feature articles each month for The Concrete Network. She is a freelance writer based in Glen Ellyn, Ill., and a former editor of Concrete Construction magazine.