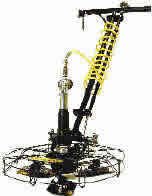 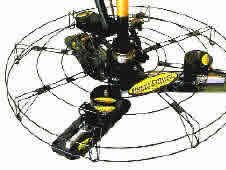 The use of toppings and overlays to decorate, protect, or restore concrete flatwork has exploded in the last decade. Behind this trend is an influx to the market of newer polymer systems that offer outstanding performance and aesthetic qualities. Until recently, however, equipment for finishing these state-of-the-art floor toppings has not evolved at the same rapid pace.

"A lot of guys doing this work are still on their knees, hand troweling. Its very labor intensive," says Drew Fagley, who for years co-owned a contracting business that installed decorative quartz epoxy systems. He and his partner wanted to eliminate the laborious handwork typically required to finish these aggregate-rich systems while finding a faster way to produce smoother, flatter, more consistent finishes. Their solution was the HoverTrowel, an invention Fagley describes as the most versatile power trowel on the market.

Although this patented precision finishing machine was originally developed for use on decorative quartz toppings, it has proven to be very adaptable and can finish many types of polymer, urethane, and cementitious overlay systems. "Its basically a power trowel that hand trowels. It can finish flooring systems where power has never been used before, only hand finishing. I havent found too many limitations. Its a matter of timing in most cases." Fagley says.

The key difference between the HoverTrowel and a conventional power trowel is its weight, which is a mere 35 pounds. "The big machines can weigh anywhere from 100 to 200 pounds. When finishing epoxy overlays, this weight causes swirl and chatter marks," explains Fagley. Although its possible to grind out these imperfections after the surface cures, the process is labor intensive, increases downtime, and is not an option for color quartz, he adds. The HoverTrowel glides over the surface, exerting just enough force to produce uniform compression without leaving unsightly trowel marks. The low weight also reduces operator fatigue and increases efficiency.

An array of interchangeable components and accessories further enhances the trowels capabilities. "It can cater to the many different overlay systems out there, as well as the same system under different ambient conditions," Fagley says. It also has applications for finishing conventional concrete flatwork, especially smaller areas or restricted spaces.

Operators can modify the base machine by switching the power source, blades, or blade guard. The power options, which include 18- and 36-cfm pneumatic motors and a new 2-cycle gas engine, supply a wide range of torque loads and rpms to handle different resin viscosities and sand-to-liquid ratios. The non-sparking, exhaust-free air motors are well suited for indoor installations, especially in sensitive environments, while the 2-cycle engine (to be replaced by a 4-cycle engine in 2003) is convenient for outdoor use. Finishers can further fine-tune the trowel's performance by adding weights in 2 1/2-pound increments to increase the trowel weight by as much as 22 pounds.

Blade options are nearly as numerous as those for hand trowels. The standard spring-steel blades can be switched to stainless steel or polymer blades. Aluminum, magnesium, mahogany, and laminated floats are also available for specific applications. All blades are available in two sizes (9 1/2 and 14 inches) and attach with snap rings for fast cleaning or replacement.

The operator can also switch from a 34-inch-diameter blade guard to a smaller 25-inch guard for greater maneuverability in tight areas, such as doorways, adjacent to walls, or around posts or columns. "The trowel can get within 1/2 inch of an obstruction with either guard, eliminating a lot of handwork," says Fagley.

Other notable features include a fingertip pitch control that instantly adjusts the blade angle up to 10 degrees, and a removable telescoping handle that extends in length from 42 to 64 inches. When the handle is fully extended, the operator can reach farther onto the fresh overlay without walking on it.

After the patent for the HoverTrowel was issued in 1994, Fagley primarily used the machine to gain a competitive edge in his contracting business. The business was sold in 1997, allowing Fagley to devote his time to marketing the trowel and experimenting with new applications. As interest in the trowel swelled, among overlay manufacturers and installers alike, he joined forces with Wagman Metal Productsthe largest manufacturer of OEM and replacement blades for conventional concrete trowels, and the manufacturer of HoverTrowels blades.

"George Wagman and I got together and decided to make a lateral move into products for placing epoxy and polymer-modified overlays, which were growing at a good clip at that point," recounts Fagley. "We created a catalog of products targeted to the contractors who apply these systems, making the HoverTrowel the flagship of the product line." The name of the joint venture is Wagman Polymer.

Included in this line of products is a Roller Screed designed to complement the HoverTrowel by dispensing overlay materials more uniformly. "It has a rear outrigger wheel that prevents the operator from lifting the box up as its pulled, eliminating crimping or uneven mortar displacement and waviness," explains Fagley. "For best results, a good bed of mortar is essential."

Many contractors have learned about the HoverTrowel and its broad range of applications by attending workshops put on by overlay manufacturers, some of whom recommend the trowel as the preferred method of finishing their systems. Fagley often participates in these workshops where he, too, discovers new applications for his machine. For example, he has seen manufacturers of thin 1/4-inch polymer-modified overlay systems use the HoverTrowel to make swirl patterns in the overlay surface, resulting in an attractive marbleized look. The trowel also has been used successfully to work dry-shake color hardeners into decorative concrete surfaces prior to stamping. The latest discovery is the trowels adeptness at finishing a new anti-fatigue urethane system for recreational use that contains thermoplastic beads.

With new overlay systems bursting onto the market seemingly overnight, Fagley has made it his mission to keep pace with the latest technology. He plans to open a research and development facility that will allow him to experiment with the most effective way to finish overlay manufacturers newest products. By documenting the results with digital photos and videos, he hopes to offer manufacturers almost instant visual feedback. A HoverTrowel "Hustle Pac," which includes accessories, a Roller Screed, and other tools, is available to manufacturers who want to conduct tests at their own facilities.

"The technology of these overlay systems has come such a long way that creative minds are doing wondrous things with the products on todays market.The HoverTrowel is constantly evolving to allow contractors to pursue these new avenues," Fagley says.

Anne Balogh writes feature articles each month for The Concrete Network ( www.concretenetwork.com). She is a freelance writer based in Glen Ellyn, Ill., and a former editor of Concrete Construction magazine.