Concrete has a long life. But when it comes to the renovation or design of a new project, the existing concrete usually gets thrown out and replaced with new materials. One landscape designer wants to see that method change. Tobiah Horton, LEED® AP landscape designer with Wallace Roberts & Todd, LLC in Philadelphia is a champion for resource-preserving 'deconstruction' techniques. He wants to see existing materials put into creative new uses. "One role of a designer is to be able to 'think in materials', or to 'think in deconstruction techniques' so that she or he can look at a building and imagine ways to take it apart that will produce useful parts or materials," he says.

Concrete Reused for Storm MitigationHorton put this deconstruction technique to the test when he designed the stormwater infrastructure of the Willow Patch Rain Garden, a 1+ acre area that receives stormwater from the adjacent downtown of Cazenovia, New York. "The site's energy-dissipation cascades and weir dams are made from reused sidewalk concrete gleaned from the replacement of sidewalks in the downtown area," says Horton. Traditional construction would have called for the use of stone rip-rap. Horton came up with the idea to reuse the sidewalks since the concrete was a sustainable material and was available at no cost for this community-based project. The broken pieces of concrete sidewalk were embedded into the soil, in some areas as much as four-feet deep. "They've worked remarkably well as erosion control aprons and weirs," he says. 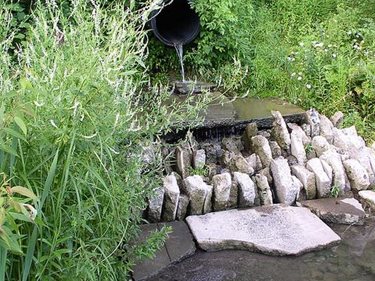 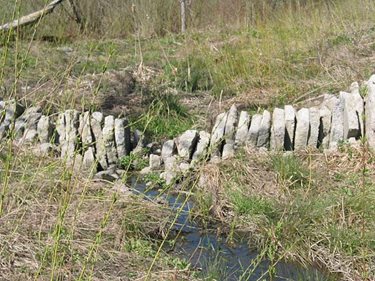 Broken pieces of concrete sidewalk were used to construct this outflow apron which is functioning well collecting sediment from water runoff. The weirs, made of concrete rubble, are control points between the basins where the flow of stormwater passes from one area to the next. They are seen as types of architectural follies that are lost in the thick vegetation of willow and native wetland plants.

Concrete Reused as Traffic MediansKnown for its maze of traffic lanes, subway lines, overhead train trellises and pedestrian walkways, the disorienting and industrial-looking landscape of New York City's Queens Plaza needed much improvement. As another one of Horton's attempts to deconstruct and reuse materials, "almost all of the torn up streetscape on this renovation was reused in the project in some way," he says.

A series of medians were constructed using roughly broken slabs of concrete deeply embedded in gravel. "We wanted the design of the medians to fit in with the highly urban context of the area, but be very different," says Horton. Described by some as 'really crowded graveyards,' and by others as 'evocative and interesting,' the median design is intended to play a significant role in creating a safer transit environment both physically and visually. "It's a rough environment to be in with overhead trains, structural steel and dozens of traffic lanes," says Horton, "so we wanted the medians to be very noticeable, and to highten the awareness of drivers, pedestrians and bicyclists to be more careful." The broken pieces of concrete were left in their highly textured state to contrast with the smooth roadways. "They're textural so people take notice and act with more awareness," he says. "People used to cross the street wherever they felt like before the medians were installed. This area has astounding stats for accidents with 100 per year in a 10-block zone." 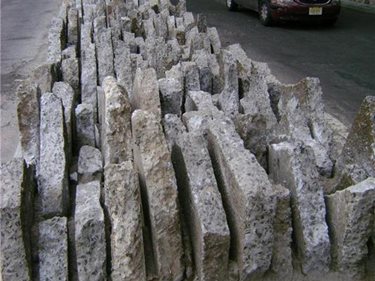 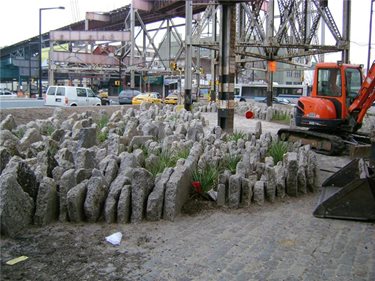 The Future of DeconstructionHorton sees potential in more applications for reusing concrete such as low cost retaining walls, garden applications, and paving applications. His mission is to continue to try to find methods to do demolition and reprocessing that are low cost and low energy. "I'm really trying to bring about awareness for designers and builders to be more creative and flexible with the redevelopment of sites and to keep as many materials and sourcing as close to the jobsite as possible. It really is more sustainable and cost effective. Plus it creates a link with the past identity of a place with its new identity," he says.

Tobiah Horton is a landscape designer, LEED credited with a focus on reuse of materials in landscape construction. He has a particular interest in stormwater mitigation and views stormwater as an untapped resource for design.