Scott Bye of Action Concrete Services in Canton, Mich., recently sent in photos of his "concrete art." Using a lightweight concrete overlay material as his medium, Bye has been able to combine his talent as an artist with his talent as a concrete craftsman. His custom drawings come to life on these thin concrete canvases, which are lightweight enough to be hung on a home's interior wall.

Bye begins by creating a frame out of light pine wood with a Styrofoam backer. Then he applies a modified cementitious overlay material to the board in two layers, starting with a basecoat less than 1/8 inch thick followed by a smoother topcoat, keeping the entire thickness of the piece less than 1/4 inch. He then hand sketches a design onto the concrete overlay surface. He engraves and sandblasts the lines of the artwork to create a 3-D effect and add greater dimension. To fill the saw cuts, Bye uses a syringe filled with clear two-part epoxy with black tint. As seen in the art above, the black lines in the face of the woman were filled using the syringe. "Using a paint brush made everything messy," says Bye, "so I started using the syringe instead for a cleaner line." 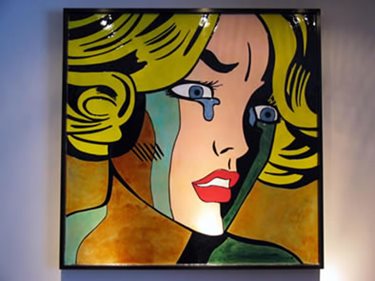 For color, Bye uses Colormaker products. He says the acid stains and dyes are best for subtle earth-tone colors, whereas the water-based stains and dyes are best for bright colors. He uses a combination of both in his paintings. One of the most important things to Bye is to keep the feel of the concrete and its texture evident in the artwork. "Using just the water-based colors felt like I was just painting," says Bye. "I didn't want it to look 'painted.' Using the acid stains lets more of the concrete show through." Bye strives to keep the characteristics of the concrete apparent, using the concrete as the art as much as the hand-sketched design. Finally, he uses a solvent-based urethane to seal the work, giving it a shiny look and bringing out the color.

The art pieces are typically 4 by 4 feet, and each one takes about 40 to 50 hours to complete. To hang them, Bye uses the heaviest gauge wire (#100) available in local art stores. He double wires the back and then nails right into a stud in the wall.

Bye began creating the hanging art pieces in 2003 as a way to experiment and test various products. He tried stains, dyes, and epoxies from various manufacturers to see the differences between them and to practice using them. He decided that turning his experiments into art pieces would be fun and would leave him with usable wall art. To Bye's surprise, the art pieces were a huge hit. Clients have requested them, and Bye has done some custom pieces.

Bye enjoys attending art shows, but says, "I never really found what I liked [at art shows], so I started creating my own." Various artists have influenced his style and color palette including Andy Warhol and Van Gogh. The art piece of the woman with the teardrop (above) was inspired by Roy Litchenstein's Pop Art style. Bye has also studied Frank Lloyd Wright, and appreciates the modern, contemporary era of the 1960s, which he tries to incorporate with his own style.