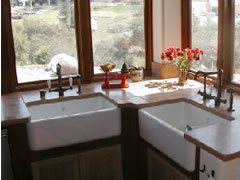 Todd Seaboch has taken the different philosophies of concrete gurus and created a niche for himself in San Diego, Calif., with his company, Concrete Craftsmen. With his skills and beautiful work, Seaboch is able to up-sell practically any job from one small concrete piece such as a countertop to whole remodels of kitchens and/or bathrooms.

His beginnings are much like others in the industry, with one twist. Seaboch started with a large specialty coating company in San Diego, and worked his way up the ranks to vice president. Eight years ago, he began fabricating concrete countertops out of his garage in his spare time, an endeavor that quickly escalated from one to two countertops a month to so many requests that Seaboch was spending all his spare time on countertops.

"I'm self-taught, and it was a great time for me, because I was experimenting with different techniques," Seaboch says of his start. "(Then) I got busier and busier and decided to do it on my ownit just took off from there."

Seaboch has over 18 years of experience in concrete overlays enough time, in fact, that he even developed products for the company he used to work for. He now designs his own products and techniques.

In fact, his products and techniques are so popular that he is set to launch a series of seminars that will cover everything from one concrete countertop to whole bathroom remodels. "I've noticed that the seminars out there don't show all the steps in the process," Seaboch says of his decision to teach. "They really aren't geared for those in the business who want to expand." 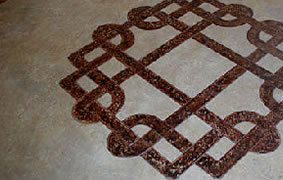 Seaboch will be focusing his seminars on his most popular sell, the bathroom remodel. "I want to train companies outside of San Diego County, so they can expand their businesses through specialty (work)," he says. "Then they can go in for a concrete countertop and end up doing a whole bath remodel."

He explains that the concrete shower is a specialty item, and Concrete Craftsmen sells not only the mixes and systems to make concrete showers, but also the process to create a beautiful, functional shower.

One such functional shower Seaboch created was for a residence in Hillcrest. The shower, washed with a natural gray water-based stain application, has cutout arches by the handles. The whole shower is reminiscent of Italian stone, and what's truly remarkable about the piece is that its hand-troweled in place as are all the showers Seaboch creates.

"I use modifiers to create waterproofing integrity," Seaboch explains of his methods. The great thing about concrete showers is that they're seamless, so they can clean up easily, as opposed to stone that must be sealed, or tile that has grout. All the corners in a concrete shower are radiused, so they're more applicable from a functional standpoint. 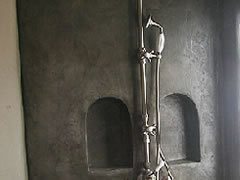 Concrete Craftsmen doesn't limit themselves to the bathroom, and Seaboch says it best, "We run the gamut as far as concrete goes. We do all interior specialties, a little bit of everything."

Other highlights of his work include 80 square feet of terracotta-colored countertops for an outdoor barbeque in a home in Rancho Santa Fe, of which the countertops were made off site and brought in; a 6-foot by 6-foot Celtic knot on the floor of an interior entryway of a home, for which Seaboch took the design, blew it up, transferred it to the floor, cut it in by hand with a grinder and stained the whole thing; and a 1 1/2 inch thick stained concrete kitchen countertops with broken faces surrounding farmhouse sinks, replete with a drain board that drains to each individual sink.

Although Seaboch says he gets most of his clients by way of word-of-mouth, he says he also exhibits at the Interior Design and Landscape Expo in San Diego every year. "We show the wall systems there. I get a lot of business/referrals from that (show) as well," he says. 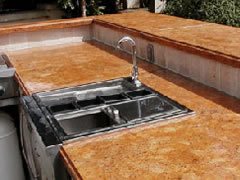 Seaboch predicts that the concrete industry is set to become more mainstream as more people see whats available and that concrete's a viable option in comparison to marble, granite and tile. "I think it will be a standard for finishes, especially in baths," he explains.

He adds that "As long as concrete work is more traditional in style and look--an old world style--and not contemporary, it will be accepted as more mainstream. Most people are fairly traditional," he explains. "They gravitate toward a warm, old world style, which is timeless as opposed to dated."

"What's cool about concrete is its ability to conform, it can be cut and stained. (I can) put a hand-stained design on a ribbon border, but to do that in tile or stone, its labor-intensive and costs a lot of money to get done," Seaboch says. "(But) with concrete, you can get the personal touches without spending and arm and a leg."